PM Modi Delivers His Most Eco-friendly I-Day Speech Ever 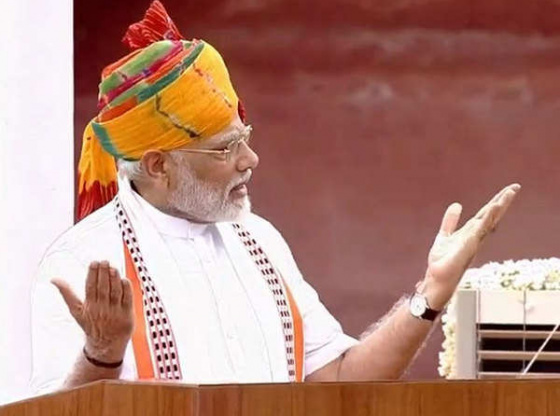 Subhamoy Das is an amateur photographer and writes on climate change and environmental issues. He is a nature wanderer and a hunter-gatherer of memorable moments from the wild. He particularly loves bird photography and is an ornithology enthusiast passionate about wildlife conservation and eco-tourism. You can tune into his Sustainability News Podcasts on the BoE website. Follow him @ twitter.com/subhamoy_das

In his hour-long speech from the historic ramparts of Delhi’s Red Fort on the 73rd Independence Day of India, Prime Minister Narendra Modi showed his concern for the environment more than ever. Modi’s address to the nation was heavily focused on sustainability, with topics ranging from rainwater harvesting and water conservation, to abandoning single-use plastic and to saving the country’s soil from chemical contamination in the name of agriculture. He also stressed on population control and consumption of local produce.

Here are six green things that PM Modi said in his I-Day speech that gives a clear message to the people of India to be more environmentally conscious and make positive changes that can make the country and the world a better place for all.

” PM Modi’s most eco-friendly I-Day speech comes closely on the heels of his 5-mile-long walk through the jungles of Corbett National Park with Bear Grylls on the latter’s celebrated television show ‘Man Vs. Wild,’ which was aired on the Discovery channel barely a few days before Independence Day. “You should never be afraid of nature because when we think that we are in conflict with nature is when the problem starts,” Modi told Grylls. He also talked about living the love for nature and not exploiting it for one’s own ends but leaving it for the future generations.

On World Elephant Day, some happy and some sad stories of how India treats her gentle giants
How Airplane Travel Is Set To Become A Sustainable Affair